End of Life Planning: In Honor Of Joey Coraccio 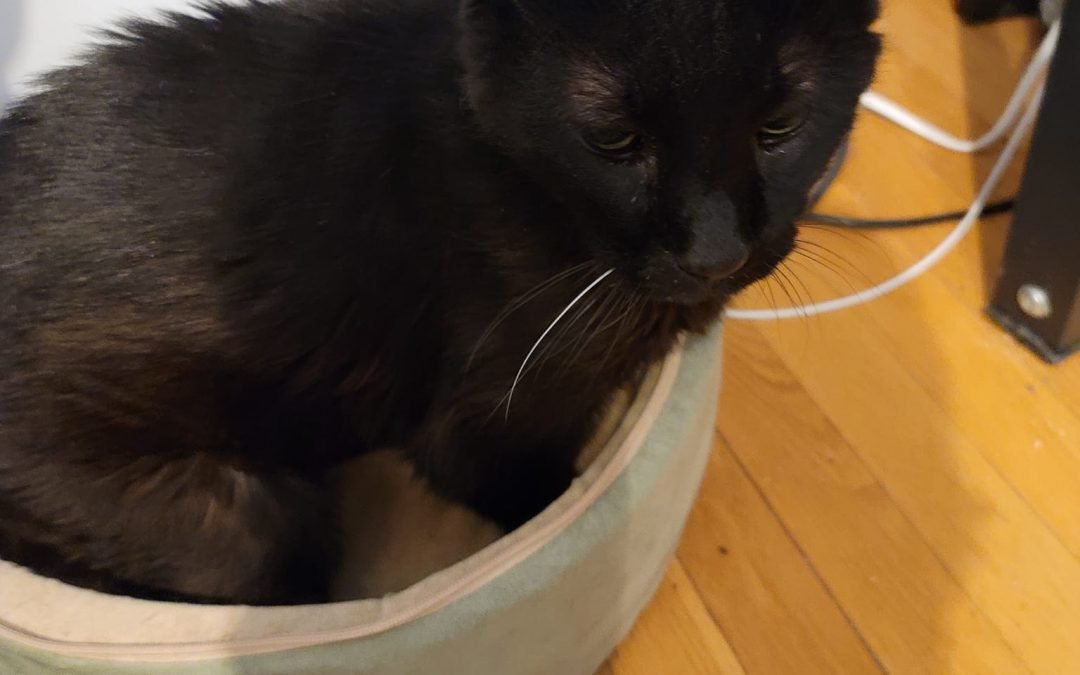 I’m allergic to cats. So much so that when I was younger if a cat came in the room, I’d start to wheeze. Of course, every cat knew to come over and rub against my leg.

After our first date, Tony sent me a picture of Joey. I thought, “Too bad,” because I’d never ask Tony, or anyone, to give up a pet. But I liked Tony and wasn’t ready to quit. The first time I went over to Tony’s place I was armed with everything under the sun for my allergies. Allergy meds, alternative medicine, tissues and more.

To my surprise, I was fine. No issues. None. Nada. Nothing. I was shocked. Surely this was a sign it was meant to be! Now that I could breathe around Joey, I quickly became enamored of him and would do anything to please him. Trust me, he made me work for it.

Tony was Joey’s human. Tony adopted him when he was a year old. Joey walked right up to him at the SPCA and chose him. Joey had good taste and knew he’d have an awesome cat daddy.

He had a gentle heart and was incredibly loyal to Tony. When Tony would come home, Joey would go down to greet him. He would sleep next to Tony, nap with him, and sit next to him on the couch. I knew to always have room in between us if Joey would come into the room.

Once we thought we had bed bugs, so we moved into the full-size bed. Joey and Tony fell asleep fist/paw bumping. Speaking of beds, Tony got 50%, Joey 40% and me 10%. The only thing I wanted when we moved was a king size bed. The percentages remained the same, but at least I got a little more room. Joey also liked to lie on my side of the bed just about every morning. He would meow at me if I was late getting up after he’d put two paws on Tony’s chest to wake up.

I remember the first time Joey snuggled with me. Tony was still on mids. After checking me out for a month, Joey hopped on the bed and sat next to me. You had to be on your back and Joey would sit next to you. After a few months, I was rewarded with petting his stomach for approximately 12 strokes and then he was done. If Tony had turned on his stomach when sleeping Joey would yell for him to get on his back so he could snuggle.

I figured out that he needed a litter box, water and of course toys on the second AND first floors. I told Tony we needed a second cat tree upstairs and he needed multiple beds to choose from because who knows how he’d be feeling that day?

Joey taught me to be a cat mom. I’ve spent sleepless nights, had anxiety and worry, and always wondered if I was doing right by Joey (and all my cats.) I’ve also had immense joy and laughter as well as a lot of fun buying cat toys. Sadly, no clothes. Joey would have shot down any clothes with a withering look.

When we first moved to Wheeling, we lived with my parents. Within days, Joey and Antonio trained my father to let them out at around 7 AM so they could enjoy the screened in porch. Joey found a kindred curmudgeon spirit in my father and they enjoyed being in the same room surveying how annoying people can be.

I’d like to think I was a strong second favorite human. Joey trained me and trained me well. How often do we get to dictate our exact needs? While I don’t have an unlimited bank account, I’d like to think I did right by Joey. When we adopted Antonio, my mom told him that he had “hit the jackpot”, so at least one person recognized that the Coraccio cats had a good standard of living and were spoiled.

On October 25th we almost lost him and it was an insane 24 hours of driving and worrying. The heart specialist gave Joey two weeks to two months. He lasted almost 8 months. It was worth every dime and would have been worth every dime had it only be two weeks.

Joey would poop outside the litter box and occasionally pee as kitty dementia started. Most mornings I would step in it and still have a couple of pairs of slippers somewhere in the basement that I had to scrub clean. I never got angry because Joey is such a faithful companion to Tony. I would hope that someone would have patience with me as I started to lose it. I never minded cutting up meds or stuffing them in capsules because it meant Joey was still here.

I don’t think it was a coincidence that he had congenital heart failure like my mom. The final gift that Joey gave me was the gift of being able to grieve. We had 10 days and spent days on the porch enjoying the breeze. We’d share memories and tell him all the awesome things about the next adventure and that Miss Berit said it was just like being in the next room. I cried and cried and cried. I cried when I didn’t think I had anything left. Joey gave me the gift of being fully present as he was dying and to feel all the emotions I hadn’t let out for both he and my mom.

Joey was the alpha male of the Coraccio cats, more male than alpha. Antonio loved to play and Joey could throw down and had incredible strength. He probably wasn’t thrilled but he never hurt Antonio, Athena, NiNI or Gus. NiNi was an annoying little sister but Joey never retaliated. He just walked away. I told Joey he was allowed to do paw paw from the other side to get back at her as she had earned it.

While Joey was dying, Antonio was grieving. He knew what was happening and was there for his brother and friend. Antonio was depressed, lethargic and wanted to stay inside. At first, I was worried that something was wrong when I soon realized he was experiencing grief. He grieved and said goodbye to Joey. Antonio also reminded me that we must move forward and that love never dies, it sometimes just changes form. The day Joey died, Antonio was himself again.

On Father’s Day, Joey let us know he had enough and was ready to go. The next morning, we told Antonio, NiNi & Gus what was happening. We wrapped Joey in a cuddly blanket that I always told him made him look like the King of the Norwegians. I held him while Tony was looking into his eyes. Joey was comforted as Tony was the last person he saw.

Our hearts are heavy, and Joey’s presence is missed, but we told him Athena would show him the best places to hunt, that there are always porches with breezes, and my mom would put me to shame with how she would spoil him.

While I’ve tried to do right by Joey, like writing about my mother, I’ll never fully be able to share the impact he had on my life. Joey allowed me to know that one of my purposes on this Earth is to be an awesome cat mom and an advocate for animals.

A special thank you to Dr. Karl Yurko of KEY animal hospital for his compassion and caring (and my awesome neighbor, his mother, Mrs. Yurko, who insisted he had to take us as clients.) And to Beth Mund and Berit Stover for guiding me through Joey’s transition as they had with Athena Agatha. End of life planning is so important for your pets.

This tribute was also important for me to share because there aren’t many things worse than someone’s response of, “It was just a cat (dog, bunny, horse, bird, turtle, etc.)” as you grieve. Or when a co-worker rolls their eyes because you want to take a few days off to mourn your companions. True pet parents are courageous because we have to say goodbye again and again.

Many people would have dumped Joey years ago the first time he pooped outside the box as he aged. I hope that if you read this, you’ll consider sticking by your furry friends through it all. And that you’ll make sure you take care of your pets in your wills and have a plan for them. And if you have POA you won’t just dump a beloved pet outside or at the shelter and you’ll understand that the pet is grieving as well. My heart breaks again and again when I see this happens to animal, especially the elderly ones.

Be an even better person than you think your pet deserves and commit to them. If you don’t have a pet, have compassion and understanding for those that do.

Purchase Julie’s books, classes and decluttering affirmations on how to clear clutter from your life: https://reawakenyourbrilliance.com/shop/